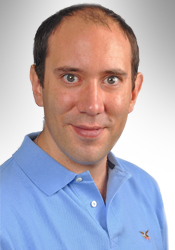 In the last ten years, computers have gotten smaller and lighter, with each new device sleeker than the one before. In the effort to pare our technology down to the barest essentials, designers are looking to cloud computing as the next form of information management. It will take a computer scientist like Andrťs Lagar-Cavilla to make this cutting-edge process faster and more efficient so it can be viable for the masses.

Cloud computing uses the internet as a giant hard drive that hosts the information of a personal computer for a user, rather than the computer itself. For comparison, instead of pumping water from a well, homes are connected to a cityís water mains where they have access to a constant supply. Similarly, cloud computing allows users to do away with their hard drives in favour of streamlined technology that can access a cloud server remotely.

Lagar-Cavillaís research introduces a new concept known as ďvirtual machine (VM) forkingĒ that will make cloud computing more efficient. A major advantage to cloud computing is its ability to draw on numerous computing resources instead of being limited to one machine. However, this operation can take several minutes to process and entails the rather ad hoc task of managing potentially hundreds of cloud resources. With Lagar-Cavillaís methodology, a single computing resource is simultaneously replicated across hundreds of cloud hosts in less than a second to greatly increase the processing efficiency.

VM forking will have a significant impact on the development of cloud computing. The highly efficient access to applications will let users seamlessly access cloud resources and assist in the widespread adoption of cloud computing. Additionally, the efficiencies of VM forking will allow cloud hosts such as Google and Amazon to reduce the number of actual physical machines needed, resulting in reductions in energy consumption and minimizing impact on the environment.