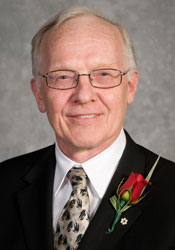 When it comes to stop-action photography, Paul Corkum has left an indelible mark on the world. He is credited with developing attosecond laser pulses—flashes of light so short that they can provide images of electrons moving around atoms.

This technology offers unprecedented access to the sub-atomic world and is just the latest of a long string of achievements that have earned Dr. Corkum the Gerhard Herzberg Canada Gold Medal for Science and Engineering.

For more than 30 years, he has pushed the boundaries of human understanding of how light and matter interact. His accomplishments have consistently drawn high praise from his peers around the world.

Much of his work has been with lasers, which have been valuable tools for a host of scientific applications for many years. Technological improvements from the mid-1960s to the mid-1980s led to a steady drop in the duration of light pulses produced by lasers. But those advances hit a wall in 1986, and remained static for nearly a decade until Dr. Corkum developed a new theoretical approach that was hailed by the Optical Society of America as one of 1994's top advances in optical science.

It took another seven years before theory became reality, and he and his colleagues successfully produced a pulse of 650 attoseconds (one attosecond is 10-18 seconds, or one billionth of one billionth of a second). Again, this was recognized as one of the key scientific advances of the year. Today, the gold standard is 80 attoseconds and falling.

The challenge of creating an attosecond pulse involves not just generating the pulse, but also verifying how long it is. Ironically, the only thing fast enough to measure an extremely short flash of light is Ö an extremely short flash of light. To overcome this problem, researchers adopt tricks such as splitting the flash into two components and making one travel an ever-so-slightly longer path to determine the length—basically getting the light beam to measure itself. The same principles that make attosecond light pulses possible can also be used to generate attosecond electron pulses.

Attosecond pulses bring researchers down to the time and length scale of the electrons that determine the properties of matter—things like a substance's reactivity, ability to form bonds, or whether it exists as a solid, liquid or gas. Studying matter at this level leads to a host of possible applications in chemistry, quantum computing, medicine, semiconductors and more.

Dr. Corkum has been able to image an electronñsort of. "You can't really take a picture of an electron," he explains. "It's a blur. We take a picture up to the limits of what quantum mechanics says you could ever possibly see."

Quantum mechanics also dictates that the very act of using a flash of light to image atoms and molecules changes what you are taking a picture of. At that scale, the photons in the light collide with electrons and destroy the bonds that hold molecules together. So, for Dr. Corkum to realize one of his goals—making a movie of a chemical reaction—he will have to literally do it one frame at a time, starting with a fresh molecule each time.

Attosecond pulses do more than open a new door to studying matter—they offer a new way to control matter on a molecular scale. In the burgeoning world of nanotechnology, the possibilities are endless.

As for where this exciting field will go in the future, Dr. Corkum says that is up to the inventiveness and creativity of those who use it. "It's like the development of the first camera," he notes. "The first step is to show you can do it. It wasn't the camera that had the impact—it was the idea of the camera that other people took and developed. We don't know where it is going to lead. This is a new tool that just opened up."

He expects that current theory and technology will allow laser pulses to get between 100 and 1,000 times shorter than they are today. "Then we'll come to another roadblock, like always in science," he predicts. "Somebody will have to come up with a new idea."